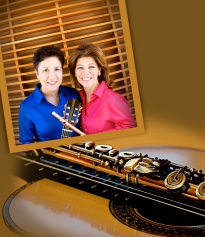 Flutist Carla Auld is a chamber musician and soloist promoting the performance and recording of new classical and cross-over music by New York area and international composers. She is a founding member of Uptown Flutes, winners of the 2002 Artists International Chamber Music Award. Ana Maria Rosado is a dynamic interpreter of classical and contemporary music who has performed throughout the United States, Europe, Latin America and the Far East. 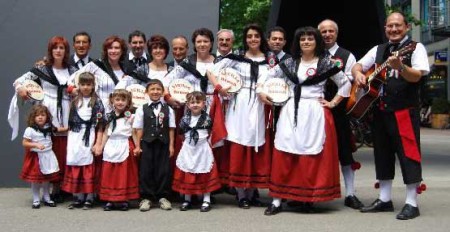 The group composed of 30 members includes a live ensemble that uses guitar, accordion and other modern instruments along with traditional Sicilian musical instruments. Through their music and dance the group seeks to illustrate traditions of ancient Sicily.

Sicilia Bedda has performed at international folkloric festivals around the world

The performance is sponsored by the Ocean County Columbus Day Parade Committee as part of annual Columbus Day celebration.

TOMS RIVER—Since his death in 1977, hundreds of books have been written about the life of entertainer Elvis Presley. Author Alanna Nash’s recently published book “Baby, Let’s Play House: Elvis Presley and the Women Who Loved Him” explores a different aspect of the King—his complex relationships with women.

Nash is giving a special presentation at the Ocean County Library Toms River branch (101 Washington St.) on Tues., Jan. 26 at 7 pm, on her book.

“Baby, Let’s Play House” is the first book to focus solely on the influence of the women in Elvis’ life, including celebrities like Cher, Raquel Welch and Cybill Shepherd, his wife Priscilla Beaulieu, and the lesser-known Kay Wheeler and Tura Satana—the women who taught him how to dance.

The book is named after the Presley song “Baby, Let’s Play House”, which was his first song to hit the national charts and his mother’s favorite of his songs.

It features dozens of exclusive interviews and never-before seen photos of Presley.

Nash, a feature writer for The New York Times, Entertainment Weekly and USA Weekend is considered an expert on the life of Presley. She has previously written two Elvis-related books: “The Colonel: The Extraordinary Story of Colonel Tom Parker and Elvis Presley” and “Elvis Aaron Presley: Revelations from the Memphis Mafia.”

To register for this free program, speak to an operator at 732-349-6200 or go online to http://www.theoceancountylibrary.org.

TOMS RIVER–The Ocean County Library is pleased to announce it will host “Shooting Across America”, a month-long women’s group photography exhibit, during November 2009.

The exhibit – a celebration of American scenery by photographers Zarita Mattox, Elizabeth Thompson, Eleanor Marquis, Cheryl Somers, and Gail Schulack – will be on display in the Toms River Branch’s two art galleries until November 30th.

This event is free and open to the public, and can be viewed during library hours.  Additional information is available from either the Web site (www.theoceancountylibrary.org) or by telephoning (732) 349-6200, xt. 5100.

TOMS RIVER –   The Toms River branch of the Ocean County Library, 101 Washington Street, will host the National Alliance on Mental Illness program “In Our Own Voice – Living with Mental Illness” Monday Nov. 30 6 p.m.

Volunteers from NAMI-NJ will discuss their experiences of living with and recovering from mental illness, particularly depression.  The audience will have the opportunity to ask questions and discuss this serious, and often stigmatizing, condition.

The program is free and open to the public.  Information and registration for the program can be found at the library’s Web site www.theoceancountylibrary.org or by speaking to an operator at (732) 349-6200.

The Toms River branch of the Ocean County Library (101 Washington Street) will present Ed Goldberg and The Odessa Klezmer Polka Band in a free concert Sunday, Nov. 1 at 2 p.m.

The band plays a variety of Eastern European, Latin and Middle Eastern music, including polkas and the czardas.

The band has performed since 1984 and has played at fairs and festivals, weddings and bar mitzvahs throughout the New Jersey, New York and Pennsylvania area. It has performed at Gracie Mansion and City Hall for NYC mayors Rudolph Guillani and Michael Bloomberg, and has toured Israel.

The band recently received the 2009 Just Plain Folks second place award for Klezmer Album Winners. Just Plain Folks is a community of more than 51,500 songwriters, recording artists and music industry professionals that provides a network of cooperation and inclusion for musicians.

Loosely translated, Klezmer means musical instrument. Jews brought this form of music with them when they migrated to the United States. Klezmer music experienced a resurgence of interest in recent years as Jewish Americans began rediscovering their roots, according to the band’s Web site.

The popular movie, “Fiddler on the Roof,” featured Klezmer music.

This program is free and open to the public. Registration is required. For more information or to register go to the Web site http://www.theoceancountylibrary.org or call (732) 349-6200.

Where: Toms River Branch of the Ocean County Library

TOMS RIVER – Empower yourself with financial knowledge at the Financial FEST!

On Monday, 16 November 2009 at 7:00 pm at the Toms River Branch of the Ocean County Library, financial gurus Antoinette Babek and Hollis Colquhoun will help you gain control over your finances with practical tips and advice.

For over 25 years, Ms. Babek was a managing partner of an industrial company and was in charge of marketing, business strategy and finance.  Currently, she is an Accredited Financial Counselor and Certified Personal Finance Counselor for a nonprofit credit counseling agency. For the past three years she has counseled thousands of clients throughout the United States.

Ms. Colquhoun is an Accredited Financial Counselor and has over twenty years of experience in the financial industry. Starting out as an institutional trader and salesperson for a Wall Street brokerage firm, she later became one of its first female partners.  She worked in the corporate bond departments of several New York firms then moved into the distressed securities market where she helped set up a new brokerage operation for one of Wall Street’s masters of value investing.  Two years ago, Ms. Colquhoun was hired by a nonprofit credit counseling agency and received certification as an Accredited Financial Counselor and as a Certified Personal Finance Counselor. Over a two-year period, she counseled thousands of clients who were drowning in debt and in need of financial guidance. She also conducted workshops on budgeting and credit for local community organizations and New Jersey State welfare-to-work programs.

Together, they have authored Women Empowering Themselves: A Financial Survival Guide.

To register for this free program, please call 732.349.6200 or visit http://www.theoceancountylibrary.org.

Author/sociologist McCormick to discuss breast cancer & the environment at TR

McCormick’s book, “No Family History: The Environmental Links to Breast Cancer,” makes a case for linking exposure to everyday products such as cosmetics and toiletries, hormones in food, household cleaners and pesticides to the increased incidence of breast cancer. It urges women, advocates and policymakers to focus on prevention by reducing one’s exposure to those environmental factors.

She also takes the big business of breast cancer that has developed recently to task. She claims that while dollars continue to pour into the search for a cure, companies that profit from this, including some pharmaceutical and cosmetic companies, may be contributors to the environmental causes of breast cancer.

Those profits, she argues, drives public focus on the cure rather than prevention, and she concludes that is the wrong approach.

McCormick earned a doctoral degree from Brown University. She specializes in environmental and medical sociology.

She is a Robert Wood Johnson Health and Society scholar at the University of Pennsylvania. She has also directed and produced the independent feature-length documentary “No Family History.”

This program is free and open to the public. Registration is required. For more information or to register go to the Web site http://www.theoceancountylibrary.org or call (732) 349-6200.

This program is in conjunction with One Book New Jersey’s 2009 Adult Selection, The Brief Wondrous Life of Oscar Wao, the 2007 Pulitzer Prize winning Novel by NJ author Junot Diaz.

To register for this FREE program, visit our website www.theoceancountylibrary.org, or call 732-349-6200.

TOMS RIVER – Two hundred years after Abraham Lincoln’s birth, the world is still talking about his legacy.  He is best known for preserving the Union during America’s Civil War and emancipating slaves.  But Lincoln’s impact on the United States as we know it goes far beyond that.

Please join the Ocean County Library Toms River Branch (101 Washington Street) on Tuesday, 13 October 2009 at 6:30 pm for an evening of entertainment and insight as we explore President Lincoln’s effect on the Constitution.

At Gettysburg, Lincoln tackled the nation’s unfinished business in extending liberties to more Americans.  Despite all the rights guaranteed in the Constitution, slavery—an institution expressly acknowledged in Article I—contradicts the freedoms people of today believe inherent to that document.  Shortly after the Civil War, three new amendments were added to the Constitution: Amendment 13 abolished slavery; Amendment 14 gave citizenship to anyone born in the country; and Amendment 15 allowed for greater suffrage.

Professor Paul G.E. Clemens, of Rutgers University, will discuss Lincoln’s contributions to those Constitutional changes as well as the power of his speech at Gettysburg.  How was the Constitution interpreted before the Civil War?  What did Lincoln say to change people’s understanding of the Constitution?  Lincoln’s legacy affected the United States government’s most important document, and we’ll learn why.

Following Professor Clemens’ remarks, Ms. Diane Lingsch will present “A Delicious Legacy: Lincoln’s Favorite Dishes”, a feast for the brain and the taste buds.  In this program, participants will learn about President Lincoln’s favorite foods as well as Civil War era fare that remains popular today.

“Lincoln’s Constitution” is free and open to the public.  Please register by calling 732-349-6200 option 4, or visiting our website at www.theoceancountylibrary.org.